Denver is about to become immersed in Lighthouse Immersive shows. Its Immersive Van Gogh exhibit was a hot topic long before it opened last fall — just weeks after another immersive Van Gogh production left town — and has been so successful that it’s been extended through May 28, despite many art lovers leaving less than impressed by a show that caters to influencers desperate to snap social media-worthy photos. Projections of Vincent van Gogh’s paintings, no matter how large and psychedelic, cannot recreate the almost spiritual experience of seeing the actual works in person. As New York Times critic Maya Pipps wrote, “Unlike my emotional high at Musée d’Orsay, these shows left me feeling largely indifferent; in fact, the strongest reaction I had was an alarming sense of intrusion and a disingenuous connection with the artist and his work.”

But Immersive Van Gogh has been such a hit that Lighthouse Immersive is again using the power of celebrity to produce two more exhibits this year: Immersive Frida Kahlo and The Art of Banksy.

“It was only natural for us to follow up Van Gogh with something just as powerful, and to us, Frida Kahlo represents that power and even more,” says Vicente Fusco, associate producer of Immersive Frida Kahlo and producer of The Art of Banksy. Like Van Gogh, both Kahlo and Banksy have attained such pop-culture fame that you don’t need to know any art history to know their names…. and you won’t learn any from these shows. 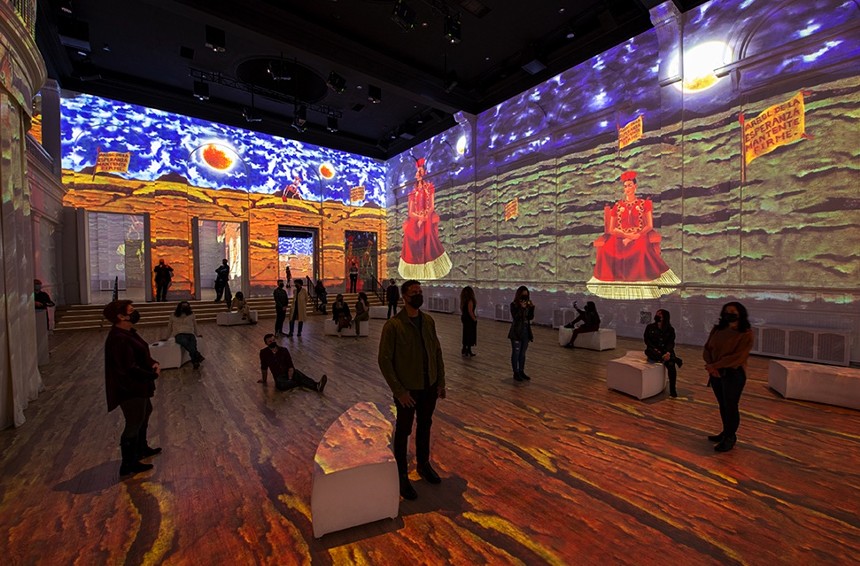 The projections will include images of Kahlo’s paintings as well as photos from her life.

Immersive Frida Kahlo will open March 3 at Lighthouse Art Space, where it will alternate with the extended Van Gogh, and will follow the same formula, using projections based on Kahlo’s stunning surrealist paintings as well as photographs from her life. They’re the brainchild of video artist Massimiliano Siccardi, who worked with conductor Luca Longobardi to create a soundtrack that will accentuate the flow of projections and add a layer of emotion. Both were also responsible for the music and images of Immersive Van Gogh.

“Massimiliano Siccardi was very adamant that we do Frida,” Fusco says. “He’s a great artist in his own right, and he imagines what he wants to project in this immersive canvas that he has to work with. And Frida made the most sense to him as an artist and to us as a company.”

Kahlo’s surrealist, colorful paintings should adapt well to the psychedelic look that Siccardi captured in Immersive Van Gogh. But the show is less about Kahlo than it is about Siccardi’s idea of ​​Kahlo. “It’s an experience around what the artist created, but Massimiliano brings in his interpretation of what he wants the audience to see,” Fusco explains. Massimiliano projects the show within Frida’s eyes, so the show represents what Frida was dreaming at some point. It’s very particular and it’s its own art form.”

The show “presents Frida not just as an artist but as a person, somebody who was so ahead of her time in so many different aspects,” he continues. “There is a narrative to the show that depicts a little bit of everything that was part of her life. She had a painful life, and it’s an amazing thing how just with music and images, you can explain that to the public.”

Most viewers might need a little more in order to understand her life; the Van Gogh show offers no background at all. But Fusco insists that the lack of context is intentional. 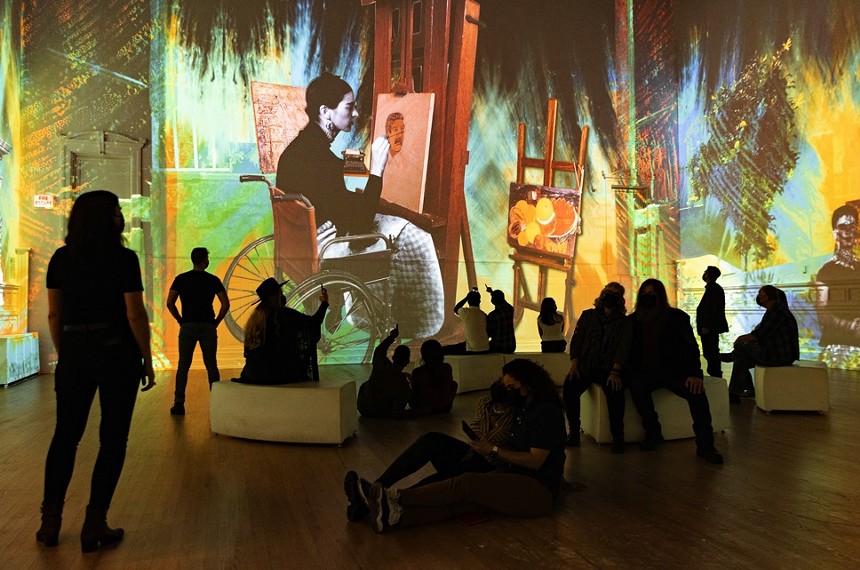 “Instead of us telling the public what they should be seeing and what they should be feeling, we like to bring it in as it is and have everyone come to their own interpretations and conclusions,” he says. “I think that is one of the beauties of these immersive shows.”

And in some ways, the scarcity of information could almost be considered an encouragement to live more like Kahlo, who stated: “I already know everything, without reading or writing.”

At least fans who saw the Denver Art Museum’s Kahlo exhibit last year — which not only explored her paintings and those of her husband, Diego Rivera, but put them in context with works by their contemporaries — will already know something about the artist. Fusco, however, doesn’t see such need for curatorial hand-holding.


“In its main capacity,” he says, “the whole idea is that people are walking into this massive space and seeing what Massimiliano wants them to see in respect to Frida Kahlo, so they get their own sense and recollection of what her life was like.”

The Art of Banksy won’t leave as much room for interpretation. The show, which opens at the Sports Castle on April 14, uses a more traditional format. More important, the titular artist’s works are actually on display; This is considered the largest collection of Banksy work in the world, with over 100 pieces on loan from private collectors. “It is the only exhibit that has 100 percent authentic, original Banksy artworks,” Fusco says. “It’s a massive opportunity: If people wanted to go see all of Banksy’s art, they’d have to go to many cities all over the world. What we’re doing here is giving a rare opportunity to see authentic Banksy art in one place.” 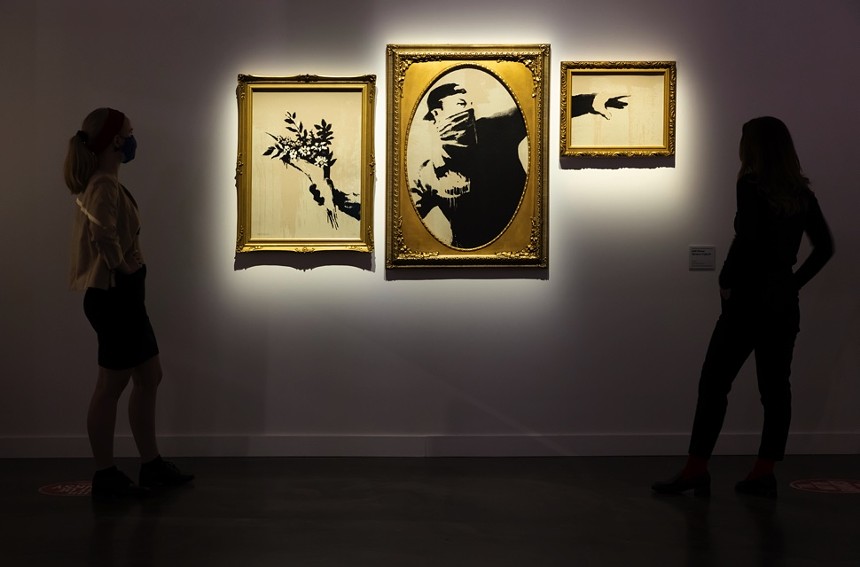 “Flower Thrower” is one of Banksy’s well-known works at the exhibit.

The Banksy show has a more “educational” intent than Immersive Frida Kahlo, He explains: “It would be within the lines of going to a museum and seeing artworks, but this has a very urban, industrial feel to it that is very Banksy. The audience will get a very good sense of Banksy’s career through different rooms that depicting different milestones, with works that represent these milestones. Banksy is very famous and iconic, but a lot of people don’t know about these different elements of his career or the story behind him. still anonymous is also just amazing.”

The opportunity to see so many of Banksy’s works is undeniably thrilling, especially considering the mystique surrounding the England-based artist whose actual identity is secret and who specializes in activism and Puckish pranks. In 2018, for example, his “Girl With Balloon” was sold at a Sotheby’s London auction for $1.4 million — and immediately lowered through a shredder. The result, renamed “Love Is in the Bin,” was later sold at Sotheby’s London for a record $18 million.

Considering Banksy’s disdain for marketing, it would be interesting to know his own thoughts regarding the show. “I can’t go into full detail there,” Fusco says. “But it’s all in good terms. What we’re trying to do here is just bring the public closer to the artist.” 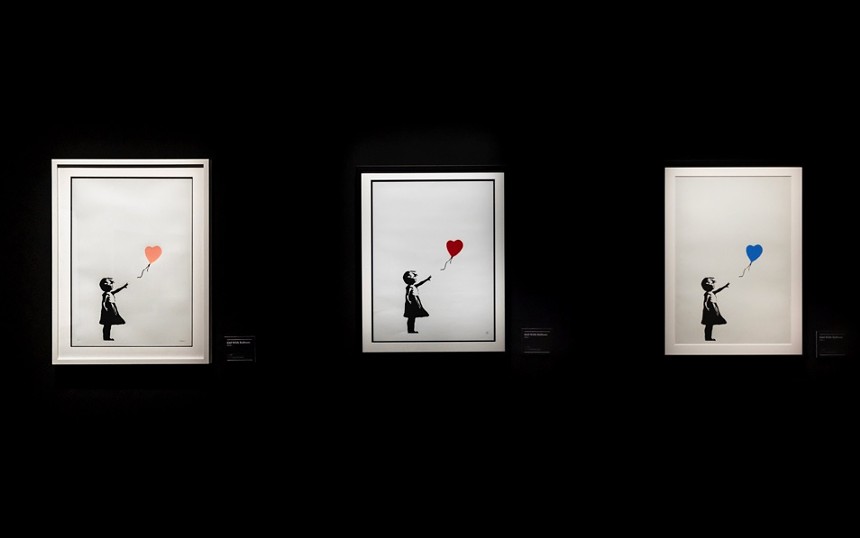 Art of Banksy carries three copies of his work, “Girl With Balloon.”

And without his authorization. “We’re not working with Banksy and it’s done without Banksy’s consent,” Fusco acknowledges. “It’s a collaboration with private collectors around the world.”

While Banksy is known for street art that’s hard to transport, The Art of Banksy will present pieces that represent “the very big world of Banksy’s art,” Fusco says. “Many images are alike or exactly equal to what is on the streets. There are many variations on the images he has created through the years, and that is what we will be showingcasing.”

Still, it will have a “completely different vibe” than museum exhibitions, Fusco notes. “It’s cool, fun and trendy.” So trendy that The Art of Banksy is offering an influencer ambassadorship; To be eligible, you must have over 2,000 followers. 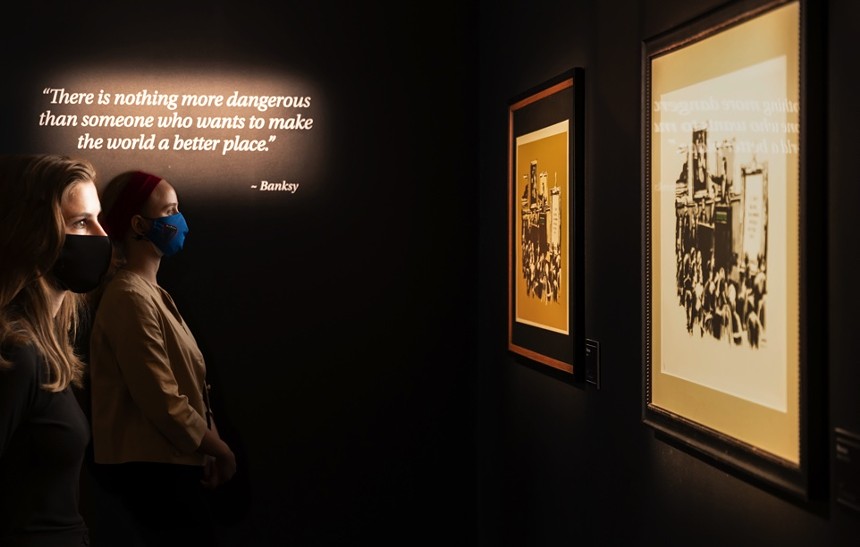 Producer Vicente Fusco says The Art of Banksy will be “cool, fun and trendy.”

“We’re very excited to bring the shows to Denver,” Fusco says. “Denver has proven to be a fantastic market with a fantastic audience that is very engaged in the arts.”

Engaged, indeed: There are many other immersive options in town. Beacon, a new art bar, is lush with immersive installations; Coastless Creatives hosts concerts curated on various themes and interactive art; And, of course, Meow Wolf Denver got off to a roaring start last fall. Lumonics Immerseda light-and-sound show based on light sculptures by the late Mel and Dorothy Tanner, occasionally pops up in the Lumonics studio, and another celebrity artist, David Byrne, will be introducing his own immersive, 15,000-square-foot installation, Theater of the Mindin Denver this summer.