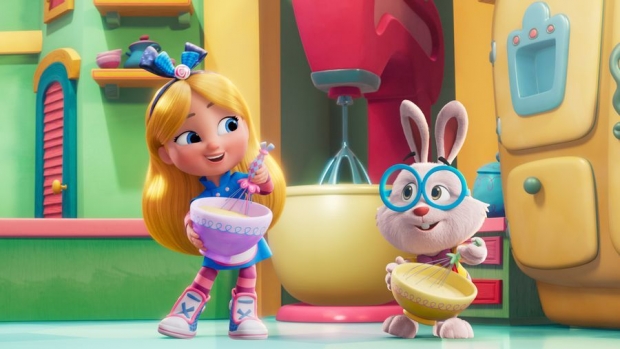 Perhaps one of the most memorable moments in Disney’s 1951 Alice in Wonderland was the Mad Hatter’s Mad Tea Party. There were musically piping teapots, three-layered frosted cakes that came out of hats, and firework candles that blasted into the sky. It was certainly a deliciously humorous spectacle, so it’s no surprise Disney Television Animation has decided to create a heritage project where Alice’s great-granddaughter – also named Alice – has her own Wonderland bakery.

“I started thinking about all the whimsy, the comedy, and the peculiar characters that are in the original movie and thought, ‘Wow, preschoolers are going to love this,’” remembers Emmy Award-winning writer Chelsea Beyl, creator and executive producer of the all-new series, Alice’s Wonderland Bakery. “It’s zany,” she adds. “It’s silly. And then we’re combining all that with baking, which, of course, kids love to do as well.”

Alice’s Wonderland Bakery will premiere on Disney Channel and Disney Junior Wednesday, February 9. The series follows a new generation Alice (Libby Rue) as she wields her whisk in Wonderland to create wild cakes, muffins, and more in her enchanted, teapot-shaped bakery. Each 3D-animated episode is comprised of two 11-minute stories where Alice uses her baking skills to solve problems and bring people together in Wonderland.

“Alice is this curious and creative baker, and she discovers how food has this power to bring people together,” explains Beyl, known for her work on Disney Junior’s Vampirina and Peabody Award-winning Doc McStuffins. “She makes friends through food. There are holidays and culture brought into the show through food. That power of food is really the heart of our show.”

In the series, Alice is also joined by descendants of other original film characters, such as Fergie, The White Rabbit (Jack Stanton) and Alice’s best friend. Then there’s Hattie (Cj Uy)–a descendant of the Mad Hatter–as well as Rosa, the Princess of Hearts (Abigail Estrella). While all the characters are, first and foremost, Wonderlandians, Beyl wanted to take the chance to reinvent characters in order to bring more culture and variety into Wonderland. 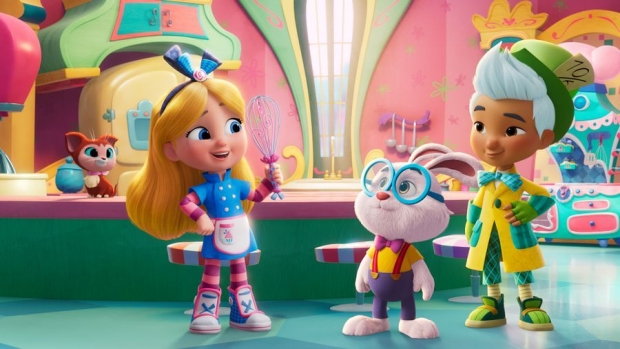 “Our Hatter family is inspired by Japanese culture — their character design, their kitchen, the recipes that Alice and Hattie make together,” Beyl explains. “And then the Princess of Hearts and the Queen of Hearts and the King are inspired by Cuban cuisine and culture. The set design and even the dialogue – we have Spanish phrases and dishes, their costumes, the palace – that was another opportunity to infuse more culture into the series.”

She adds, “And food is also the perfect avenue to bring in other cultures. For instance, in one story, Rosa’s grandfather is missing her grandmother, so Alice helps Rosa make pastelitos. The recipe reminds the grandfather of his wife, and that’s a really sweet moment that Alice’s food brings to Rosa’s family. Food is also a medium for self-expression and creativity, and that comes in another story with Hattie trying to figure out how to recreate a tart and he’s trying to bake like Alice, or he’s trying to bake like Fergie. But then Alice is like ‘You’ve got to bake like a Hatter.’”

Co-executive producer and art director Frank Montagna says that, despite Alice in Wonderland‘s rather bizarre and sometimes even frightening storyline, it’s been a surprisingly seamless transition from 1950s 2D film, to 2022 3D/CG preschool TV series.

“I think Chelsea and I love a good challenge,” he notes. “There are so many things that are in Wonderland that are just fun – the Mad Tea Party and the cards and the mazes – and so we boiled it down and we took the things that are fun, and just pushed the scary away. Throughout the book and in the movie, we see ‘Eat me’ and ‘Drink me,’ so visually, I could really picture this concept of combining Alice in Wonderland with a bakery in my head when Chelsea first pitched me the idea.”

Montagna has worked in the animation department on a number of Disney’s more iconic 2D films, from Mulan to Tarzanand most recently served as art director on Disney Junior’s 3D animated series Elena of Avalor. Though one of the oldest Disney projects Montagna has worked on is The Hunchback of Notre Dame from 1996, he says the original Alice in Wonderland has “always been such a core part of my being,” and it didn’t take long for him to find the look for Alice’s Wonderland Bakery.

“Bringing it into a modern CG world was actually a little bit easier than you’d think,” Montagna says. “Because those original designs are so shape-driven, everything is already very round and sort of bouncy and rubbery.” 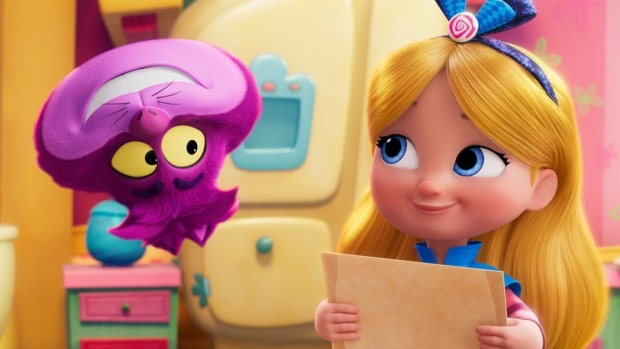 Working with ICON Creative Studio, Montagna says he and the team were constantly trying to push that “bouncy and rubbery” feel into Alice’s Wonderland Bakeryespecially when it came to the show’s one and only original film character: the Cheshire Cat (Max Mittelman).

“I am a huge Cheshire Cat fan, so I was like, ‘He needs to be perfect,'” says Montagna. “Chelsea, Nathan Chew, our supervising director, and I watched the original film where this character stands on his head, talks upside down and gestures with his feet. All of these things we wanted him to do in the series. We really needed him to feel like that character from the original film. And in CG, especially in TV CG, where we don’t have the huge budget of a feature, you have to have these things really thought out. You have to really know what you want the character to do so that they can be rigged properly.”

Luckily, Montagna and the team seem to have achieved their goal as the witty feline feels even more energetic than ever in his new CG element. “I think what we ended up with is really amazing,” he says.

Beyl and Montagna also wanted to make sure their preschool series paid homage to not only the original film, but all the other iterations of Alice in Wonderland that have surfaced over the years. 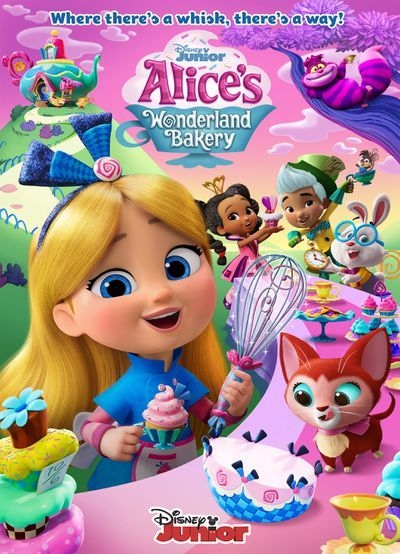 “Alice is very unique film,” notes Montagna. “It’s very strange but it’s also very well-known and has a global following and fandom. There are so many different iterations of Alice in Wonderlandwe really tried to think of this series as all-encompassing and as the Disney presence of Alice recreated for a new generation.”

He continues, “So much of the world is inspired by some of the Disney parks around the world. In almost every Disney Park, there’s a Mad Tea Party and, in Tokyo Disneyland, there’s a Queen of Hearts restaurant that looks straight out of the movie. There were so many things that we could pull from for the series. We even have some elements inspired by the Tim Burton film.”

But, above all, one of the sweetest animation treats – pun intended – has been bringing baked goods to life where the normal laws of physics and the natural world don’t apply.

“Alice’s pantry is inspired by the original White Rabbit hole with its never-ending shelves of ingredients,” says Beyl. “And we wanted to feature real-world food while infusing wonky Wonderland type ingredients. So, we have flour but then we also have ‘Bread and Butterflies’ or we have ‘Disa-pears’ and ‘Rea-pears’ and things like that.”

She adds, “We were actually just talking about The Great British Baking Show the other day and how in a lot of these competitions they’re trying to construct something that feels impossible. But, because we’re in Wonderland, nothing is impossible.”

Alice’s cakes are proof of that.

“Our prop designer, Stephen Wright, comes up with the most amazing designs for cakes,” says Montagna. “And ours don’t have to look realistic. If we want to do an upside-down cake, we can actually make it upside down. But we definitely want everything to look delicious.”

Aside from wanting to make every viewer’s mouth water for sugary treats, Beyl and Montagna both hope Alice’s Wonderland Bakery infuses powerful messages into the hearts of young kids, like a surprise jelly filling in an already beloved doughnut.

“It all stems from how food can make someone feel better or just help you discover who you are as a person,” says Beyl. “The original film is very much a solo journey for Alice. But in our show, Alice has her gang, and these friends give the show a structure and heart for preschoolers to see themselves in one or more of those characters. And it’s all wrapped together in an essence of genuine curiosity that makes it truly Alice.”

Victoria Davis is a full-time, freelance journalist and part-time Otaku with an affinity for all things anime. She’s reported on numerous stories from activist news to entertainment. Find more about her work at victoriadavisdepiction.com.