Does the game’s beautiful animation and intriguing narrative make it a worthwhile platformer?

Poison Mushroom for…
Occasionally frustrating controls; falls just short of the majesty it aims for

Welcome to another Backlog Review, where we take a look at an older game that fans might have sitting waiting to be played or are still considering giving a purchase. This time we’re looking at Omno.

Games can be stressful. It’s odd that a hobby many claim is an escape or a break from reality can be so stressful. I’m sure most gamers have rage quit at some point or never finished a game because of their dreading of that final boss. Not to say the stress is bad. There are good and bad kinds of stress. Many gamers, myself included, love games because of the challenge they provide.

But sometimes life is challenging and stressful enough as it is. In times like this, I find myself seeking short, stress-free games as a way to relax or calm down anxieties such as A Short Hike, Slime Rancheror Animal Crossing. I’ve especially sought these types of games as I’ve gotten older and my life has become more hectic. Video games are fantastic because they can be something to kill time, challenge us, make friends, or become a sanctuary from stress.

Omno is the debut game developed by animator Jonas Manke aka StudioInkyfox. I’m a big fan of movement and animation, so I began my journey through Omno curious to see how Manke’s experience as an animator would influence and enhance his game. I was not disappointed. His skills shine through in each cutscene and every interaction you have with the plethora of distinct creatures you’ll catalog throughout the game. Each new creature you come across has its own unique movement and personality. This diversity made the world feel alive.

There are also varied environments to explore which add a nice change of pace that you can’t help but appreciate for just a bit. Omno is a linear adventure puzzle game that has you journey the path of previous pilgrims as they left their civilization behind to follow the light. Why? The reason for this journey is addressed in messages left scattered by a previous pilgrim. You’ll have to discover each and sometimes solve puzzles in order to access them. I’m a believer in less is more. I’m often bored or annoyed with over-the-top or extensive exposition in dragged out cutscenes. Omno balances gameplay with a story perfectly sprinkled throughout.

Controls are simple, and though they can be occasionally frustrating, they are overall smooth. You play as a scarfed, magic staff bearing character. At the start, you can jump or view a simple map of your surroundings. As you advance, you’ll gain new abilities that will tie in with puzzles and traversal. My favorite ability was one that allowed you to glide around atop your staff like a surfboard or skateboard. It was especially cute when penguin-like creatures noticed my gliding on the tundra snow and joined alongside me. Unfortunately, a couple of the abilities can take some time to get used to and cause a few challenging platforming situations, but never in conjunction with anything necessary to proceed. 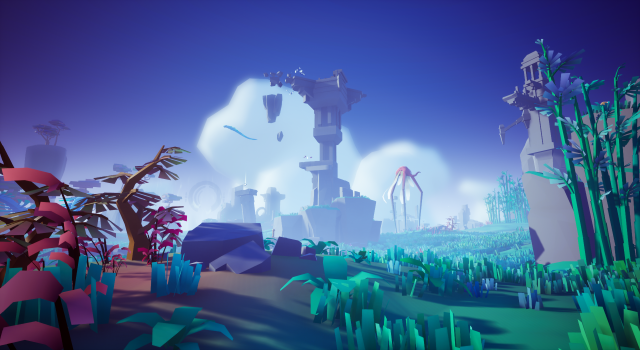 Abilities are acquired in each new area and the way to progress is by solving puzzles and platforming challenges to move on. The puzzles were simple. I wouldn’t qualify them as head scratchers, yet they were still satisfying to solve. An interesting feature is that only three puzzles need to be solved in each area, so any puzzle or platforming challenge never becomes too frustrating; you can always just try a different one. Yet another reason why Omno is always a relaxing experience.

Nothing in Omno is ever frustrating or stressful. The world is peaceful, friendly, and meditative. It really welcomes you to love it and the story’s reminder to love and appreciate life and nature harmonizes well with the gameplay, something that makes the message really stick. Omno is definitely a game to relax with. It’s a short adventure that can be completed in two or three days and I felt that the length was just the right.

There is never any violence or enemies in the world of Omno. Something I found refreshing in the game was that even carnivores and scavengers, which are normally portrayed as aggressive enemies, are friendly. 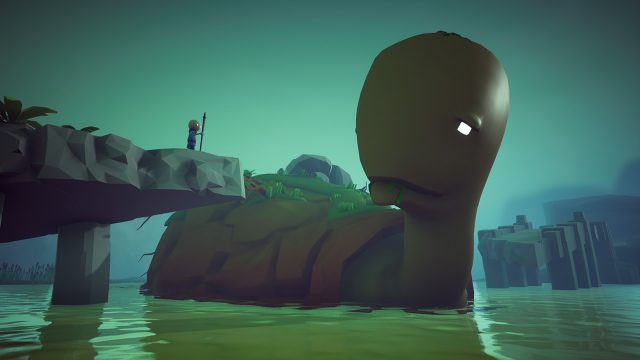 Omno is an impressive feat by one developer, that is undeniable. If you enjoyed Journey, Abzuor The Last Campfire for their peaceful atmosphere, you will likely enjoy Omno, though it will feel very familiar. And although I loved and appreciated the narrative that was left behind in notes and how it synchronizes with the gameplay, I still felt that the game lacked a deeper layer of depth and engagement.

Animation is the art of movement and Omno is clearly a work of art, but isn’t the masterpiece I was hoping it to be. Despite that, it is still an impressive feat. It is no surprise that the game reached three times its funding goal on Kickstarter. The game is beautiful and enjoyable. It brings new elements to the growing genre of peaceful games. I especially loved the long list of new creatures to interact with. However, minor details left me not quite falling head over heels.

Nintendojo was provided a copy of this game for review by a third party, though that does not affect our recommendation. For every review, Nintendojo uses a standard criteria.